In 2012, while working on another project with Eric Minh Swenson, artist Alex Couwenberg proposed a documentary film idea on process and passion, specifically the passion associated with surfing and its relationship with creativity. As a curator focused on Southern California, I found this intriguing. Surfing’s connection with the history of materials in Los Angeles had been well-established, but the process had not really been discussed. A call to the art-making community went out and the response was overwhelming. I had no idea that so many serious artists were surfers. After speaking with dozens of artists, the direction became apparent: all revered the power, beauty and complexity of the ocean, and the physical nature of their interaction with it, both in the water and out.

Based on their contributions as modern day pioneers of the Southern California art world and their availability to travel as a group to Hawaii, the birthplace of surfing, 10 artists were chosen to represent a section of the Southern California contingent. Several of the artists were born and/or raised in Hawaii and have family histories there. The film comprises artist interviews in their Los Angeles studios, as well as footage of them working, surfing and living on location in Kailua-Kona, Hawaii. While in Kailua-Kona, the artists participated in a panel lecture at Holualoa Art Foundation’s Donkey Mill Art Center and an exhibition of their work at MELD Gallery.

The documentary was shaped by the directorial vision of Los Angeles-based filmmaker Eric Minh Swenson, who has produced over 500 films featuring major LA artists, curators and collectors. Footage by celebrated cinematographers Marcel Morin and Sarah Mueller of Vitae Sessions coupled with beautiful water images from MANA artist Ken Pagliaro compliment Swenson’s aesthetic sensibility. Our team crafted a feature length film focusing on the brotherhood of a group of artists selected for their artistic contributions in the Southern California art world, each working on their own terms within the Light and Space, Finish Fetish, Design and Assemblage movements that have come to shape and define the Los Angeles art scene. As divergent as each artist’s work is in comparison, they all share a common thread in their process and vision and are constantly driven by the influences and forces of family, friendships, “stoke,” aloha and the common bond of the unseen mana (power) of the land and sea.

Their interactions and conversations with each other and the environment are the focus of the visual narrative. The film MANA, which debuted in Hawaii at the Kona Surf Film Festival to a standing-room-only crowd in 2014, became the impetus for the Museum of Art & History’s exhibition, The Artists of the Film MANA, which opened to record museum visitors in the summer of 2014. I am extremely proud to present this incarnation of the original Museum exhibition here in Naples, Italy. I would like to thank Cinthia and Renato Penna for their support and facilitation, all of the artists for their willingness to participate, and especially Eric Minh Swenson for telling the story. 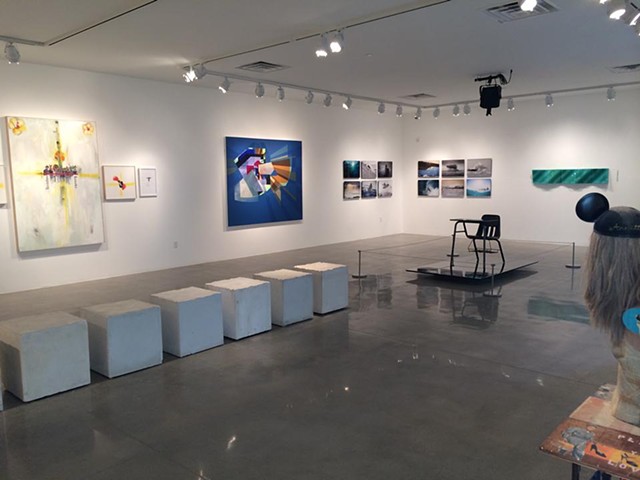 The Artists of MANA at MOAH Lancaster, CA
< previous